How To Dress Well at the Echoplex review 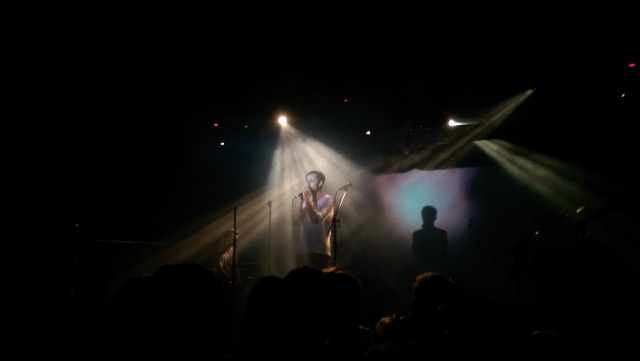 A bit past the midway point into his set, How To Dress Well’s Tom Krell revealed his date at the Echoplex happened to be a noteworthy anniversary in his life (not his birthday, as someone guessed, to which Krell smiled and informed him and the crowd of his misconception.) Per Krell, his best friend unexpectedly died four years ago on Aug. 22, a story he glanced in the intimate, hazy setting.

Krell and his band weaved in between sexy slow jams and moderately uptempo cuts for just over an hour for an attentive crowd — a fact repeatedly relayed by Krell and one that impressed him, especially compared to his apparently calm crowd the previous night in San Diego. He admitted that he made up a story about him and his father to pass the time to the lame crowd, insisting that (paraphrasing) a crowd did not deserve his going all out if they didn’t.

But instead of having the sad anniversary quell his energy, Krell was a force onstage, leaning into the emotion and unleashing his powerful vocal stylings behind his three-person backup band. He didn’t follow up the revelation with an elegy — contrarily, he rocked the 700-person capacity venue with “Very Best Friend,” the most consistently energetic song, production-wise, on his newest album “What is this Heart?” where the primary commonality is the 12-song record’s mostly even lowkey nature. But “Very Best Friend” is atypically spirited, now with a heavy-handed melancholic subtext.

The contrast is ever present in the Echoplex’s neighborhood of Echo Park, a hotbed of hipsterization. It’s just up the street from Brite Spot Diner, the restaurant frequently depicted in FX’s new, excellent show “You’re The Worst.” Despite the area’s dilapidated exteriors, it panders to a demographic with a bit more dough to spend and a jonesing for authenticity to an almost comic degree. (In the interest of full disclosure, this writer has lived in Silver Lake for the last year-ish. So I’m somewhat guilty of flocking to a neighborhood while taking advantage of some of the perks provided by the aforementioned described group.)

The Echoplex did not differ from the demo — attracting odd shirts (such as a cream-colored one sported by a young dude with the first half adorned in randomly placed strawberries), cheap cigarettes and a market for overpriced local craft beer. It was unofficial couples not, which was not brought to my attention. Good thing my hot date St. Archer accompanied me Friday night.

The opening act was Dead Times, another band in the electro-R&B movement. Their production mildly inspired the crowd to move, but too often, the instrumentation drowned out the vocals. Plus, dude’s dancing was a little much and tried to sell the beats too much. More than anything, his gyrating drew a majority of the attention — not the music. The memorable moment of Times’ set was the Michael Jordan game-winning shot sample they played before the band’s third song. Other than that, the 30 minutes before Krell and company passed without much fanfare or excitement. The best pre-Dress moment occurred when The Weeknd’s “What You Want” and D’Angelo’s “Devil’s Pie” filled the room from cheap leather-bound couch to cheap leather-bound couch.

← Your move, chief
Some thoughts on Adrian Peterson →