Review: ‘Orange is the New Black’ – ‘Looks Blue, Tastes Red’: Everybody likes something a little tasty 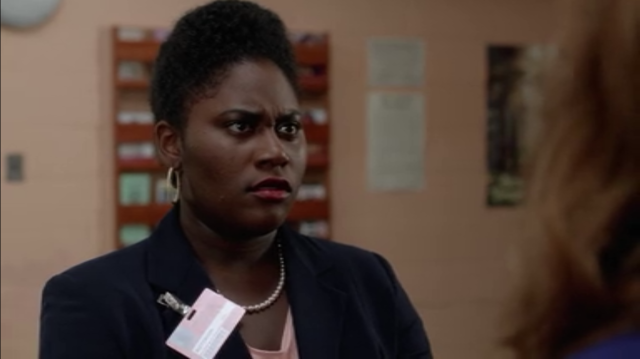 The Litchfield women all crave some semblance of family. Of all the flashbacks the show has presented, a common thread, besides each woman possessing some golden heart is familial dysfunction. It’s why Poussey nearly cried when she almost failed to say goodbye to Taystee upon her release last season. It’s why all those mildly religious crazies flock behind the ultimate religious crazy that is Pennsatucky. It’s why both Aleida and Gloria act as a motherly figure to and diuretic-finder for Daya. It’s why Red eventually succumbs to the company of her fellow geriatric inmates. All these people are in a fucked environment, and they need some way to get by in the day-to-day bullshit of prison. Having people who care for you certainly would make the experience somewhat palatable.

The sad trend continues with the revealing of Taystee’s life as a group home, resorting to trying to charm potential parents into picking her to join their family. But she’s constantly rejected. No one wants the 10-year-old, as both she and drug-dealing matriarch Vee note, who christens Tasha “Taystee,” after hearing the spunky little girl declare, “Everyone like a little something tasty.”

And after such a rough life, why not enjoy in the little things? Whether it’s googly eyes, a blue snow cone that tastes red or a home-cooked meal? Tayste managed to resist the allure of becoming one of Vee’s “kids” for years, even given her affection for R.J. and after one of her group housemates defects. Eventually, when she’s in dire straits, she displays her tremendous mental math skills and memorization, earning her place in Vee’s small circle/crew. And once you’re in with Vee, you’re in. When R.J. is killed, Vee promises, “I protect my babies… this one got away. I will die before I see that happen again. I will keep you safe.” While Taystee doesn’t die, she gets locked up… where Vee may still look out for Taystee — to Tasha’s dismay, her mother figure joins the Litchfield crew.

Despite her light-hearted, defense-mechanism, Tasha has dreams. She ended up back in the pen because her support structure outside of the bars was about as present as Pennsatucky’s pearly whites. The prospect of a new job via crushing the career fair inspires her to diligently prepare for the head-to-head interview against Flaca, the product being a slew of the episode’s funniest quips (please, someone get Leanne a wetsuit. She really wants to work with dolphins; also, when Flaca makes a move on the Philip Morris employee, Black Cindy’s assertion of, “That’s a foul!” cracked me up) . But her goal isn’t realized, as Natalie Figueroa dispels the rumor that last year’s winner had a gig lined up, instead settling for $10 in commissary funds as consolation. She acts gracious, but behind her tepid smile, she hurt.

Someone who made it all happen, though? Pennsatucky! She looks OK about a month after her fracas with Piper, save her teeth, somehow worse off. Upon her release from the SHU, she and Healy hash over the events that set Season 2 in motion—namely, Healy (more like HEEL-y, right?) sicking the religious whack job on Piper. For all her drug-consuming and preaching self, Pennsatucky is shrewd. She draws Healy in, coyly claiming to remember some other details about the night in question, and offering up her silence for a new set of teeth. She’ll rejoin general pop after scoring her new set of chompers, but Leanne comments how nice it’s been without her. Hmm…

Things aren’t all that great in the free world, as Larry and his pops spring for a schvitz, talking over Piper’s predicament. After some convincing and being surrounded by men “enjoying each other’s company,” Larry decides to go for some strange and buck his World of Warcraft addiction (remains to be seen if he will), using the “oh she cheated therefore I will” rationale that never got anyone into trouble. He then goes to Polly’s to help with the newborn since Pete’s out of town. Polly, giving zero fucks, roams back and forth half naked before hopping in the shower, a sight that appears to make Larry slightly uncomfortable at first, but he keeps his mouth shut afterwards. Maybe that was his “cheat.” Maybe he needs more. All I know is that he’ll have one hell of an edging session later that night.

We get the scoop on Crazy Eyes…