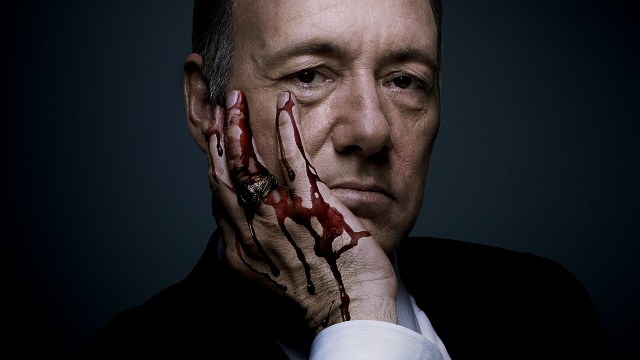 NOTE: Spoilers for both seasons of “House of Cards” follow.

“The only thing more satisfying than convincing someone to do what I want is failing to persuade them on purpose.” -Frank Underwood

Hype. So much hype surrounded one of Netflix’s first  and most significant entrants to original programming . Once, the company stocked ads in DVD boxes for a ludicrous service. Just about every town had a Blockbuster: why rent DVDs through the mail? Netflix shifted to consumer streaming in 2007, soon becoming a hotbed of random movies and various TV shows for its subscribers to binge watch. After a couple years, the practice became a cultural staple; “Netflix” became a verb. The next step? Produce its own content.

I stayed away from the “House of Cards” pandemonium when it premiered in Feb. 2013 despite the pedigree of those involved. Kevin Spacey acted spectacularly in two of my favorite films (“The Usual Suspects” and “Seven”). Though he seems to select roles that play to his ego (more so recently), when he grasps a role, it’s engaging and over-the-top, in a fun way bordering on self-indulgent (“Casino Jack,” “21,” this show).

David Fincher is a dark, creative auteur, one of today’s premier directors. More than perhaps any of Fincher’s technical abilities, he’s able to deftly craft tone for his projects — just about every film he’s directed possess no confusion what it’s trying to be. You immediately feel sick after Morgan Freeman exclaims, “John Doe has the upper hand!” while watching Brad Pitt toil in the desert (an ending that Fincher and Pitt fought to keep). “Zodiac”: gorgeously filmed, filled with the leads’ relentlessness in pursuing and solving a permanent mystery. He managed to make the Facebook origin story sexy, thrilling and compelling, three adjectives one would not typically associate with Harvard computer nerds – with help from an unauthorized book and an Aaron Sorkin script. And so on.

Between the two of those folks — and the support of Reed Hastings’ empire — success among critics and viewers was inevitable. After hearing it was “good” not “great,” I deferred watching the show, spending the 10-11 hours more “productively” (watching the many other shows I had become a slave of). I was already disappointed after hearing from critics whom I admire that the series was not anything spectacular. Spacey and Fincher would have to wait.

Not being in school presents different things, such as unstructured free time with no responsibility, time to fill in many unproductive ways such as picking up new shows, especially new shows that would double their episode count in a week’s time. Friends were raving about its first season, building excitement over the imminent next chapter. I didn’t want to be left out in the cold from the cool kids. So, six days out from the second season’s premiere, I met Francis Underwood.

It’s safe to say that, in television history, there are few moments more memorable in setting a character’s tone and personality than mercifully choking a neighbor’s dog. Hi, Frank! Just like that, his ethos and logos are laid before you, his distaste for useless, unnecessary pain and all. He wants absolute power. Why? We’re not really sure. He has yet revealed such motivations to the viewers during one of his myriad pontifications.

In the first episode, he seeks revenge on the new presidential administration that spurned his Secretary of State appointment. But revenge is hardly good enough, at least in this fictitious political atmosphere. Moving up the executive branch food chain appears to be his only goal, collecting as much power and leaving scorched careers in his wake. All he wants is a sociopathic desire to enforce his will on anyone (except perhaps his equally position-minded wife Claire, played by the crush of every boy who sees “The Princess Bride,” Robin Wright). This is one of the few problems of “House of Cards.” Frank’s motivations are never clear or relatable on any level, unless you, literally or figuratively, burn things and hurt animals.

The show – well-produced, well-acted and entertaining — is the viewing experience equivalent of Freddy’s ribs. But like those succulent cuts of pork I want every time Frank slums it and orders half a rack, they aren’t as good as they can be — the illegal slowly bled kind produce the best taste. The show is a glossy soap with a dash of noir, playing up dramatic relationships and twists (apparently Rachel’s a lesbian without any legitimate character development and Frank likes to get down in three-ways with his secret service. Sure) without earning them. They’re there to make your mouth drop, and they do. The buzz is inescapable and essential: with hundreds of alternatives, shows need to cultivate a moderate-to-high degree of buzz. It’s hard to fault networks and showrunners enduring that reality, but in “House’s” sense, it can feel cheap. In Beau Willimon’s defense, there is some responsibility to remain faithful to the source material, both the British series and the book that inspired it. But sometimes a source material requires some adjustments to make it work. “Game of Thrones’” plot elements and characters have been shifted around. Book fans aren’t exactly pleased, no. But they still watch, because the show with 89 main characters in a sprawling world feels cohesive.

Shows must be shocking to sustain interest nowadays. The Zoe Barnes character was tossed off Parliament in the derivative series, so her death, ultimately, was not surprising. In the midst of her investigation into Frank’s dealings, the character regressed. She was an annoying reporter, somewhat aloof (who doesn’t pay for their food?) and lone wolf. Janine (once the typical “female in higher power who shuts out the young up-and-coming female” turned into a solid character) gets out of town. This may be the one sensible action by any character in this show. Lucas pursues the story, delving into the deep internet at his office with the idealistic handle “DataCrusader.” Eventually, he falls into the feds’ trap facilitated by Doug Stamper, and he disappears into prison. Onto the next conquerable conflict!

But don’t worry, because EVERYTHING WORKS OUT FOR FRANK. How is that even mildly compelling? Exciting? Yes! But there’s little drama in seeing a “protagonist” able to best any obstacle thrown his or her way. Would people revere “Breaking Bad” if Walter White earned what he needed and extricated himself of the meth-peddling business? Or if Don Draper was the perfect family man and faultless ad executive who drank a modest two-to-three times per day, even keeping the whole “stealing someone’s identity” thing? Probably not.

Sure, the Raymond Tusk and presidential spats and congressional hearings push the drama to the finale. But it’s defused in ways that graze Frank, all the consequences turning up for someone else to accept. The manner in which he plays just about everyone in congress and Washington positions every other character as his pawns, a small degree of free will. It is a D.C. fantasy (as Grantland’s Andy Greenwald mentioned on a podcast with Chris Ryan). Frank’s world. He’s become an enviable figure to some degree, on Patrick Bateman’s level, which is frightening. This Tweet, so true it hurts, distills the show’s frustrating driving force.

“House of Cards’” story does enough to keep people watching to ensure the “I need to know what happens next” factor that leads to watching multiple episodes in one sitting, or all in one weekend. But given those involved (yes, Fincher only directed two episodes), there’s potential for more depth. The best moments have been Doug’s AA speech, just about anything with Peter Russo, Frank returning to his alma mater and Claire’s CNN interview. The frequency of those things lacked. Season 3 will assuredly present Frank’s downfall after ascending to the presidency. Maybe that will change the series’ trajectory and legacy. But count me as a skeptic.